170+ Is GOOD Score For Win This Match

Both Oman and Sri Lanka won the toss and chose to field first on Sunday. Our expectation is that whoever wins the toss in this match will also insert the opposition…………. .

Any score over 150 will be above par on this surface. Pace bowlers took wickets but it was the spinners who had the most success in Muscat on Sunday.

Weather Report: There will be clear skies and a constant temperature of 32 degrees for this evening match………. 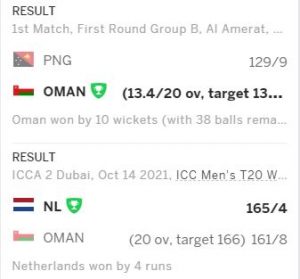